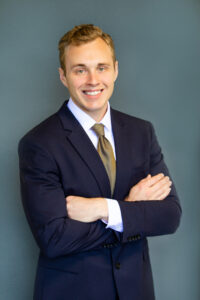 
Parker Pezzati – is responsible for property-level financial analysis and generating internal reports relevant to operational performance. He also conducts stabilized property site inspections.
Prior to joining Covenant Capital Group, Parker served four years as an Airborne Infantry Officer in the U.S. Army. During his military service, Parker led soldiers on both strategic and tactical levels through various operations. As his final assignment, he deployed to Cameroon, Africa where he worked extensively with allied and multinational forces while serving as Officer in Charge of Base Defense Operations. Parker holds a Bachelor of Science in Business Administration from the University of Kansas (2016).